Until further notice, we assume most events have been canceled due to COVID-19.
If you plan to attend any of these events, please call ahead. 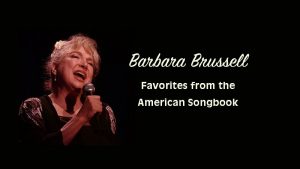 Award-winning cabaret entertainer Barbara Brussell will sing favorites from the American Songbook in a return performance in Franklin, 7 pm, Friday, October 25. Her show will be at the home of her friends Tom Morgan and Erna Morgan McReynolds. Ms. Brussell will be enroute to New York City to perform at Manhattan’s famed night club Don’t Tell Mama as well as at the 30th Annual New York Cabaret Convention at Jazz at Lincoln Center. Now residing in California, she has performed with the Catskill Symphony and Schenectady Symphony conducted by Charles Schneider. Her career includes roles in national tours of several musicals, among them Fiddler on the Roof and The Fantastiks.

She began her New York cabaret career in the legendary Oak Room of the Algonquin Hotel and went on to create over a dozen cabaret shows for various venues. Brussell was the nominee and winner of several musical awards, including the Backstage Bistro Award and the Mac Award. Various entertainment reviewers have sung Ms. Brussell’s praises. They include Rex Reed for the New York Observer: “Captivating! In a cabaret world…Barbara Brussell is a dream come true.”

Admission will be a $20 donation, all funds to go to the performers. The evening will include refreshments and desserts.

Tickets are not available as this event has passed.