Last year, the Franklin town government spent $1.72 million. Most of that came from property taxes (66 percent) and state aid (27 percent). Where did this all go, and how did this spending compare to similar towns?

Financially, the nineteen towns in Delaware County fall naturally into four groups. In 2018, the two smallest towns (Bovina and Masonville) budgeted less than $1.0 million. Almost half the towns budgeted $1.3 to 1.7 M. Franklin is among this group. Five towns that are slightly larger in area and/or population (Andes, Colchester, Hancock, Middletown, and Roxbury) had the largest budgets at $2.6 to 4.0 M. Towns with the largest populations (Delhi, Sidney, and Walton) had intermediate budgets at $1.8 to 2.2 M. 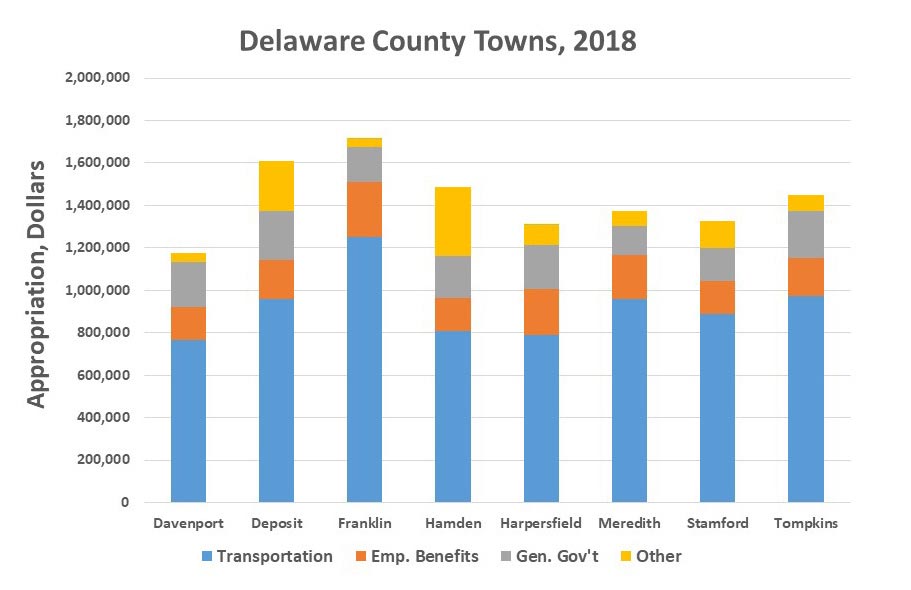 In our county, there are nine towns (out of nineteen) with modest budgets: Davenport, Deposit, Franklin, Hamden, Harpersfield, Kortright, Meredith, Stamford, and Tompkins. These have a population of one to three thousand people and an area of 40 to 100 square miles. Three of these are our immediate neighbors: Davenport, Hamden, and Meredith.

Figures for most towns are taken from their Annual Update Documents filed with the New York Office of the State Comptroller and available at: http://wwe2.osc.state.ny.us/transparency/LocalGov/LocalGovIntro.cfm.

The exceptions are the towns of Bovina and Davenport, which have not filed the mandatory financial reports in 2018. (Davenport has not filed in the last decade.) The New Franklin Register obtained recent budgets from the town of Davenport (one of the nine) through a Freedom of Information Law request. We will be comparing the figures from the 2018 budget, the most recent year for which all numbers were available at the time of this writing.

For rural towns such as those in Delaware County, the single largest appropriation is invariably for the highway department. For the largest towns, these appropriations make-up 40 to 50 percent of the budget. Mid-sized towns such as Franklin spend 60 to 75 percent of the budget on roads — not necessarily because they spend more on highways, but because these towns have smaller overall budgets. Among these nine mid-sized towns, Franklin spends the most on highways, both in the amount and as a percentage of budget. At $1.25 M (72 percent), it is the only town of the nine that spent over a million dollars on roads in 2018. However, Franklin has the largest network of roads to maintain with 109 centerline miles. Richer Walton and Andes have similar-sized networks (96 and 102 centerline miles) and spend similar amounts ($1.14 and 1.25 M). The richest towns with approximately one hundred miles of roads spend much more: Colchester at $1.69 M and Roxbury at $1.79 M. 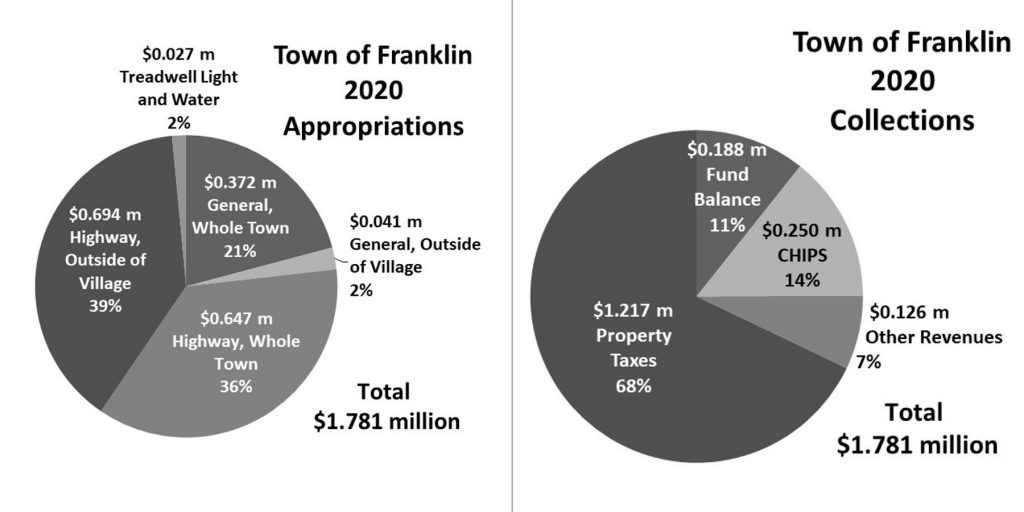 Looking specifically at town spending of the various highway accounts, Franklin is mostly like the other eight mid-sized towns. The exception is that in 2018, Franklin’s spending for machinery was the largest and more than twice the average of the rest, $0.34 M vs $0.16 M. However, such spending varies greatly from year to year, with the replacement of a single piece of equipment costing well into five figures. For the last decade, the Franklin highway department annually spent $0.18 to 0.34 M in machinery accounts, averaging $0.26 M. Figures on spending in the five earlier years (2013 to 2009) are missing because Franklin officials did not file the required financial reports.

For the towns in Delaware County, the next two largest appropriations are for employee benefits and general government. Benefits usually make up the larger of the two, or the two appropriations are close to equal. Conversely, towns that spent significantly less on benefits are Andes, Deposit, Hamden, Sidney, and Tompkins.

In Franklin, the second largest appropriation is for employee benefits. For Franklin, this was $0.260 M or 15 percent of budget. Almost all of this goes for the highway superintendent and seven full-time employees of the highway department. Typically, towns in our county budget 10 to 20 percent for these benefits, and therefore Franklin is not exceptional. When these benefits are added to the highway budget, maintaining our road system takes more than 87 percent of the total budget, or six out of every seven dollars. Our Franklin municipality is a highway department with a government tacked-on.

In Franklin, the third largest appropriation is for general governmental expenses. Most of this goes to salaries and expenses for officials at $0.14 M. The rest ($0.029 M) goes for attorney, auditor (AUD), board of ethics, elections, engineering, and traffic violation (transfers). Most of the nineteen Delaware towns budget 10 to 20 percent for general government. Franklin is at the bottom with nine percent ($0.16 M), and Sidney is exceptionally high with 34 percent ($0.76 M).

Together these three categories make-up 80 to 97 percent of the budgets for the nine mid-sized towns. Among this group, Franklin is exceptional in how few other services it provides. Its total appropriation for other than transportation, employee benefits, and general government is less than three percent. Of this remaining $0.05 M, almost one half ($23,970) goes for Treadwell water district and one quarter ($14,370) goes for youth recreation. For Treadwell, roughly half of this expense is offset by fees.

To put this another way, Franklin spends over 98 percent of its budget ($1.69 M) for the expenses, salaries and benefits of officials and the highway department.

More than third of the towns in our county are free of debt, including Davenport, Delhi, Franklin, Sidney, Stamford, Tompkins, and Walton. Towns that spent six figures on paying down their debt tend to be the richer ones: Andes (7.8 percent of budget), Deposit (6.8), Roxbury (4.8), and Hancock (3.4). (Even though town of Meredith spent only $53,600 on debt service, this is 3.9 percent of its smaller budget.) Often debt is used to finance large infrastructure projects, such as the construction of town office buildings.

The tentative 2020 budget for Franklin was presented at the budget workshop on October 1st. Appropriations were little changed from last year – for details, see the article on Tentative Town Taxes ’20, page 11. The public hearing on this budget will be Wednesday November 6th, the day after the general election. Following that, the board will vote to finalize the budget with any amendments.

This article is the second in an occasional series analyzing how Franklin tax dollars are collected and spent. The first article is Budget Matters: Salaries in NFR #37, Summer 2019.