By the end of 2019, most of the Town of Franklin should finally have high-speed internet service delivered via fiber optic cable strung to your door. This is financed, in part, by a grant from Broadband New York to the Delaware County Broadband Initiative (DCBI), a partnership of Delhi Telephone Company, Margaretville Telephone Cooperative, and Delaware County Electric Cooperative, which formed in 2013.

Recently, an existing service provider, Frontier Communications, strung fiber-optic cable. Their system runs glass cable to Adtran boxes on poles but relies on twisted-pair copper wires from the box to the customer, possibly for miles. It currently delivers 20 million bits per second [Mb/s] or more, downloading.

From the group, DTC would be the service provider to Franklin. DTC has divided its work in Franklin township into phases by census blocks.

As part of Phase 1, work has already begun in the eastern corner of our township, mostly along County Highway 16 and connecting town roads.

Work in Phase 2 includes the towns of Kortright, Meredith, and Hamden, but not Franklin.

Phase 3 is in the planning stage. Current plans are to cover the Town of Franklin along and west of County Highway 14 and along and south of State Highway 357. New York State will pay $4.3 million and DCBI $6.6 million. Work on the trunk lines is expected to begin in late of 2017 and finish in late 2018. Hook-ups to businesses and homes will continue into 2019 and maybe 2020. 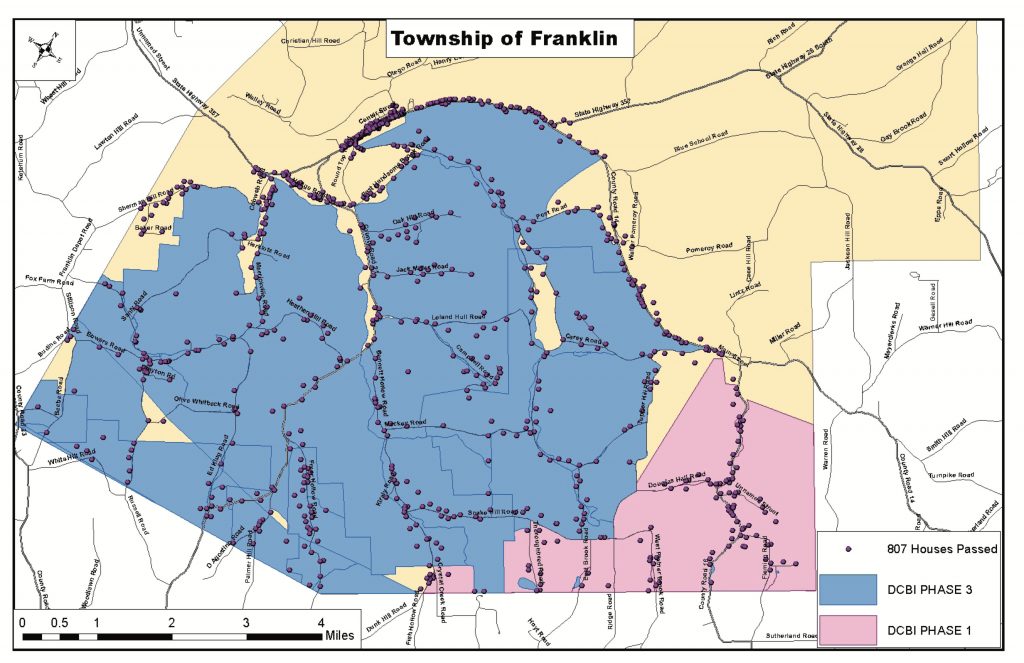 Unlike the Frontier network, every customer of DTC network will have a dedicated optical fiber strung to the box on their building. Current capacity for the glass network is 1 Gb/s (1,000 Mb/s), with the potential for upgrading to 10 Gb/s.

In case of power outages, each installation will have an eight-hour battery, with room to add two more. This base unit plugs into an electrical outlet, and therefore battery power would be unnecessary if you have a generator. Service could still be lost to a falling limb or a gun shot.

Installation is free. While the grant requires DCBI install for free only up to 150 feet from the road, it will do so for distances a few times greater. However it will only string along existing poles or through existing buried conduit. For underground installation, landowners would have to trench across their property and bury conduit.

The grant also requires that DCBI provide a minimum of 25 Mb/s at a fixed price of $60 per month for five years. (It defines customers with internet service less than 25 Mb/s as unserved by broadband, and those with service less than 75 Mb/s as underserved.) Currently DTC offers its customers a base internet service at a download to you of 75 Mb/s and an upload from you of 10 Mb/s for $60 a month. Conditions of the grant require this price be offered for five years. Available are several options at higher rates up to 1 Gb/s.

Phone service is available through voice-over internet protocol for $40 a month. In switching over, you should be able to retain your existing number. Basic internet service and phone service is $80 a month.

Video is available with base internet or with phone or both. There are three choices of level of video variety: lifeline (15 channels), basic (115), and expanded (134). Several additional digital music channels are included. Phone, basic internet, and expanded video is $175 a month. Premium-channel packages cost extra after a free 90-day trial.

DTC requires that the Town Board sign agreements before work may begin. A public hearing on these agreements will be held before the monthly meeting on Tuesday July 11th at the town garages. As part of the easement agreement, DTC will pay the town $2,500 for an equipment shack to be located on town property adjacent to the garages. As part of the franchise agreement, DTC would provide free internet and video service to the town garages. As a courtesy, it will likewise provide free service to municipal buildings along its routes: Franklin Fire Hall, Treadwell Fire Hall, Franklin Town Hall, and Franklin Village Hall.

For more than a decade, people of Franklin have suffered from a substandard communications infrastructure. Technology progressed greatly, while our service remained little changed. This limited both our economy and our population. Businesses are handicapped without broadband internet. Residents can only live where they can make a living. Second-home owners, who contribute to the local economy, cannot work from here, necessitating shorter vacations. Also broadband offers entertainment: almost half of the bandwidth is used for video. Meeting people’s needs and wants encourages them to make Franklin their primary residence.

Thanks to the Delaware County Broadband Initiative and funding from New York State, communications in Franklin will soon join the 21st century.

Brian Brock is president of the Greater Franklin Chamber of Commerce.

« Too Wet to Plow » The Bare Truth