Living Lightly on the Earth

We are all deeply embedded in a society that thrives by exploiting resources while polluting the environment. This is not something we can change overnight nor even in a few decades. Our industrial revolution developed within a history where scarcity was a certainty and abundance a rare blessing. This is still true for most of mankind but we, the fortunate benefactors of the plenty produced by the scientific innovations of the last couple of hundred years, are finally becoming aware, thanks to that same science, of the perils and the high price of the path we are on. We are learning that we can gradually slow the pace of our pillaging of earth’s riches — without going back to living in caves — by continually deepening our knowledge of the ways things work in nature. 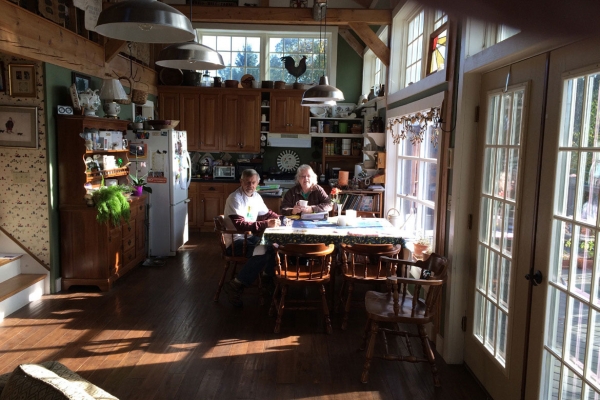 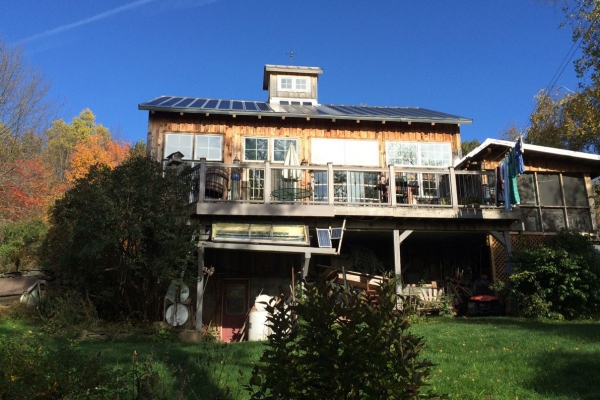 So what can each of us do?

With every decision, we must consider the destructive impact of the way we live, how it is caused and how it can be mitigated, so that the impact of our lives can achieve greater harmony with nature.

Case in point: a place to live. Can we provide year round comfortable housing for ourselves that will not deepen the abyss between man and nature by using fossil fuel to heat or cool…especially with our sub-zero winter temperatures?

Recently the New York Times reported a new trend: young people preferring smaller houses. It has been dubbed “the tiny home” movement. The Times referred to the new small houses as cabins, evoking the log homes that early settlers built. The era of the McMansion would seem to be ending.

When Donald and Louise Hebbard retired and sold their dairy farm in Treadwell, they needed a new home. Don’s older brother Rodney and his wife Sally had already built an energy efficient house based on the passive solar designs of Bruce Brownell, founder of Adirondacks Alternate Energy, who was inspired by a natural physical property of heat: that it rises. (See article in NFR Vol. II No. 3)

And then there is nature’s other gift: the below-surface temperature of the earth – how deep depends on where you live – is always above freezing. Continuous circulation of air maintains the two Hebbard houses above freezing temperature no matter how cold it is outside

Inspired by his brother’s home, Don began to plan his house and how he would build it himself. Always fascinated by the possibilities of efficiency – for Don, the “essential component of any successful human endeavor” – he wondered if he could build a house even more simply and efficiently, moving warm air but without ducts, using only natural convection. Instead of a sand mass in the cellar with ducts running through, Don decided to use stones without ducts so that the warm air could rise by natural convection through the spaces between the stones.

Don’s house has traditional post and beam framing which supports the exterior siding and interior walls. On the outside of the post and beam frame is what he calls the insulation envelope: two 4′ X 8′ x 2″ Thermax panels tightly packed together, joints staggered and taped.

A fan in the cellar draws warm air down from the peak of the house to a heat storage mass of stones in the cellar. The result is a structure that needs less than one-seventh the heating or cooling energy of the typical new house.

What is the house like inside? Lovely, and full of light. It is has both cozy corners and soaring spaces. You enter through a door on the north wall facing the road. On one side of the door is a bedroom and bathroom, on the other an office. Above is the floor of an open loft which runs the length of the house but only half the depth, creating a double height living area, with kitchen, dining area and living room arranged along the wall of south facing windows. French doors open onto a long balcony overlooking the Ouleout Valley and the hills beyond.

It turns out that the foot print of this house is not unlike that of my own house, built in the 1820’s. Interestingly, its orientation is the same – kitchen and parlor sharing a long three-windowed wall facing south. A low energy way of living is not so new after all. But our fossil fuel profligacy has allowed us to scorn – or just forget – a lot of what we’ve known for millennia.