The tentative 2021 budget for the Town of Franklin would spend $1.80 million. To partially finance this, the town board plans to raise $1.23 million in property taxes from landowners, an increase of $ 0.017 million (1.38%) over the 2020 budget. This increase in the levy would be just under the state-imposed soft cap, same as last year.

Highway capital expenses would increase by net $20,000: equipment maintenance increasing by $30,000 and machinery decreasing by $10,000.

Appropriations and revenues for the hamlet of Treadwell would be unchanged from 2020. Expenditures for water and light of $26,750 would be partially offset by revenues of $11,015. The balance of $15,735 would be a subsidy paid by all Franklin landowners. 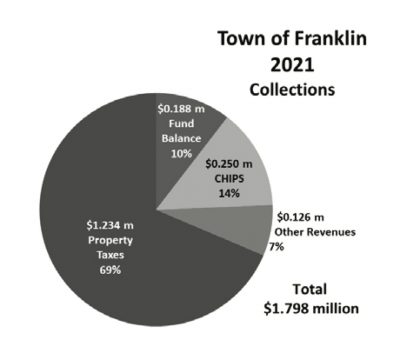 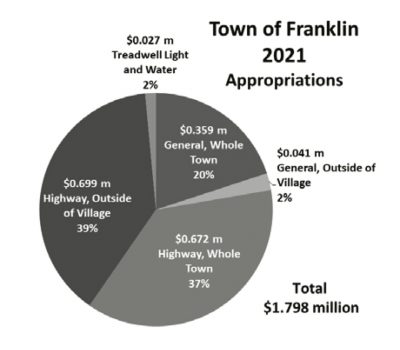 These appropriations would be mostly paid by property taxes, but there are significant contributions from revenues and appropriated fund balances. Revenues would remain essentially unchanged from 2020 at $0.376 million. Most of the revenue would be the $0.250 million from New York state under the Consolidated Local Streets and Highway Improvement Program. The next largest would be $0.038 million from rent of the land under the cellphone tower.

Appropriated balances are funds carried over from the previous years. These funds are allocated to provide operating cash and a buffer for unexpected costs. The total of $0.188 million would be the same as last year. Over the last decade, fund balances have declined from $0.262 million.

Annual [Financial] Update Documents (2014 to 2019) reveal funds that are not reported in the budget document, typically a hundred thousand dollars or more. In the most recent AUD, cash on hand was $0.526 million whereas the total allocated fund balances reported in the 2020 budget was $0.188 million – a third that amount. Funds in these eleven town bank accounts are not included in the budget document. Cash in the Kellogg-Franklin Trust is not included in that total.

Annual financial reports for Franklin 2005 to 2008 and 2014 to 2019 can be read, downloaded, or printed at: http://wwe2.osc.state.ny.us/transparency/LocalGov/LocalGovIntro.cfm. Our board has not audited town books for 2009 to 2013, nor has the supervisor filed AUDs for those years.

The levy for the Franklin and Treadwell fire departments, which is set by the departments themselves, was not known at the time of the budget workshop. Levy for 2020 was $0.227 million. While this levy is collected through the town tax billing, it is not part of the town budget.

This tentative budget was considered during the annual budget workshop at the meeting of the board on October 6th. Beforehand, the tentative budget was prepared by supervisor Taggart (financial officer) in consultation with director of finances Warner (assistant financial officer). At the workshop, Mr. Warner read only the few changes from the 2020 budget. (If you forgot to bring your copy of last year’s budget, then you could not follow along.) After some remarks by the supervisor, the board approved his tentative budget without discussion. Thereby, it became our preliminary budget.

Copies of the budget are available from the town clerk. A public hearing on the preliminary Town of Franklin Budget 2021 will be held Wednesday the 4th of November at 6:00 p.m. in the town hall.

Immediately after this hearing, the board may approve the preliminary budget either with or without revisions. While a budget does not have to be passed that evening, it should be approved by November 20th.

« Office Efforts Part I: Not Here nor There » Welcome to Sidney Center